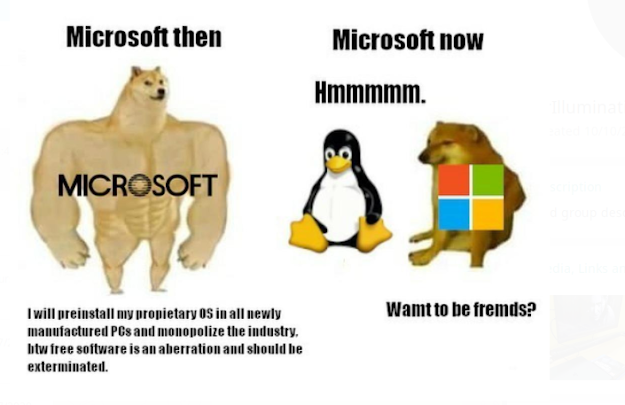 It's the year 1991. Microsoft and Apple have been trading blows for decades now, and finally the war ground is about to settle.

Imagine you are Microsoft at that time. With assured global dominance, things are looking pretty good for you. But, you are still cutting out the main heroes of the story, i.e. the software developers, sysadmins, etc.

Meanwhile, this Finnish geek along with some people who call themselves "rebels" are duct taping an OS kernel together which they are calling Linux.

Initially, you are not worried about them. They are just a handful of people trying to do this as a hobby. But eventually, the sheer size of Linux gets so big that you can't help but notice this huge behemoth. The amount of people contributing to the Linux kernel gets much, much larger than the number of the Microsoft devs.

To give you an estimate of how much, there were around ten thousand lines of code in the 1990s. A decade later, that was at 3 million lines. And in case you are wondering, it is at around 20 million now. The above statistic gives you a rough estimate of how massively open-source software can grow, and it's power.

Linux was this weird Operating System that gave you the source code, the liberty to play with it and make it behave however you wanted it to. This was strange in the sense that nobody had previously thought of the idea of giving away the source code for people to modify.

Getting access to the Linux command line was a transformative experience for a lot of people. They just could not go back from this appealing experience.

Some people were always begging for access to the command line. Before the OS wars, there was Richard Stalman with GNU. But Linux was the OS that delivered like no other.

While Apple and Microsoft were fighting for domination, the internet was more peer-to-peer in nature and not so much client-server. IBM was the opposite of Linux wherein they did have terminals, but they were all dumb terminals. This meant that they were only smart enough to manage the UI, but the user wasn't able to use it in any other way.

The GUI was slowly becoming more and more popular, but there was always a pull in the opposite direction wherein developers wanted access to the command line.

The early contributors and lovers of the open-source software were pioneers, I  am standing on their shoulders, we all are.

Let's now forward a little bit to the year 1998, where things have changed a lot with a sudden revolution in the client-server internet realm. At this time, every business out there wanting to stay relevant not only has to get a website built, but also needs to manage databases, update the website, and a host of other things. All of which required them to pay for server space.

This is the point that Microsoft realized that Linux was taking away it's customers. Now when you poke a bear as big as Microsoft, you bet they are going to react. So to try and get people to switch over from Linux, they started spreading this propaganda called FUD (Fear, Uncertainty, and Doubt).

The idea was that as Linux is open source, it's not reliable and full of bugs. Initially, some businesses became wary of Linux. But,

Money has a funny way of convincing people to get over their hangups.

It was not just Microsoft, it was an entire industry vs this weird new guy.

For example, anyone with a stake in Unix was concerned about Linux and its rise. The SEO group that maintained Unix at that time waged lawsuits for decades, but all in vain. Linux was on the rise and Microsoft still needed to make a move. To top it all off, one of their biggest competitors, IBM just invested a shit ton in Linux because they predicted that Linux was going to be the future. Even the money side was in Linux's favor now.

Fast forward to a few years, 99 percent of the servers were running Linux. Along comes the smartphone, and Linux was ready, waiting.

Apple and their iPhones took up a sizeable share of the market. Microsoft hoped to get in on that but surprise surprise.

Linux was there too, ready and rearing to go.

Google used the Linux kernel to create and develop Android.

The ground was breaking up now, and Microsoft was about to fall into the cracks.

Microsoft's then CEO Steve Balmer's perspective on Linux was that open-source is cancer. If you give people the source code to anything, they are going to copy-paste it, and then some viral license such as GPL is going to be applied to it.

Fast forward a few years, Steve Balmer is out and Microsoft has got a new, forward-thinking CEO - Satya Nadella. Let us drop this for a minute and Imagine something. Let's say you are playing football and all of a sudden the ground becomes slick. What do you do?

You have to change your footwear and continue playing right?

This is something that Satya realized.

Linux was the tide and trying to prevent it from coming would be extreme foolishness. The only way out was to go with the tide.

In 2013, Microsoft's cloud platform Azure supported Linux virtual machines out of the box. Satya realized that they when you release a cloud platform, you can't force people to use a particular operating system. If you want enterprises to use your cloud service, you can't shove a choice down the people's throats. It's 2013, Satya Nadella gets up on stage, and they are just trying to get one big fat point across. 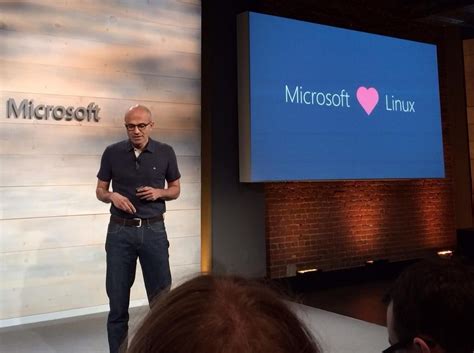 He tells everyone how 20 percent of Azure is Linux and that Azure will always have world class support for it and it's distributions. Microsoft had to swallow their pride and disagree with whatever they said earlier.

Time and time again, we see the power of open source and what it can achieve. A company even the size of Microsoft can't compete with the thousands of open source developers and volunteers. It was change or perish.

Today's Microsoft is simply not your Mom and Dad's Microsoft. Microsoft now releases a lot of their source code under the public domain. For example, when .NET was released, Microsoft didn't think there would be any contributions. But today, more than 50 percent of contributions come from outside Microsoft.

Linux is not the enemy, it is the atmosphere.

I guess the lesson in all this is that successful companies have to remain open. When we are wired together, our capacity to work and create increases manifolds. And isn't that the whole point of software development?

That concludes our series on the OS wars, and the power of open source.

Stay tuned because this Tuesday, we are going to have a very requested post - How to sign git commits using GPG keys.